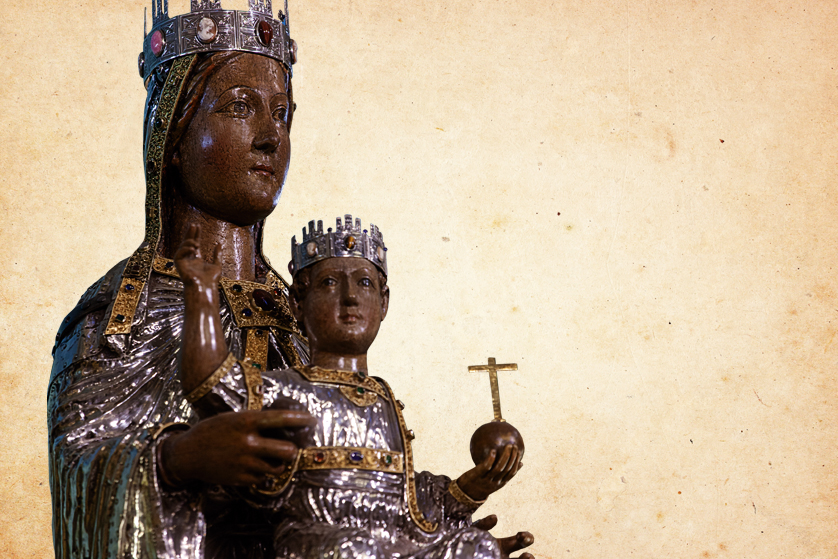 Patron saint of the city and of Toledo’s Cathedral

This report will be published days before the Virgin’s Assumption festivity which commemorates the glorification in heaven of the Virgin in body and soul every August 15. It was written the first days of the year, after the sudden death of the emeritus canon and archivist of Toledo, Mr. Ramón Gonzálvez Ruiz, who left proof of his Marian devotion in countless works like the one published in the second issue of this magazine. There are so many reasons to now introduce the patron saint of Toledo: the Virgen del Sagrario, who reigns in Toledo’s Cathedral along with other sculptures of Mary as the Virgen del Tesoro, the Virgen Blanca and the Virgin of the High Altar.

Toledo’s Cathedral is dedicated from its origin to the Virgin Mary. The Visigothic inscription of the Descent Chapel speaks about the first consecration to the Catholic rite of the primitive cathedral. A ceremony that took place in the first year of Recaredo’s reign on April 14, 587.

However, it did not arrive to Toledo’s Cathedral the first known icon of the Virgin until the 12th Century. It was a small wooden statue from Limoges —which later was plated in silver in the 16th Century— and which currently is exposed in the Cathedral’s Museum.

On the occasion of the second consecration of the temple in the 13th Century, the founding bishop of the Gothic nave, Jiménez de Rada, ordered the statue of the Virgen del Sagrario for the central Cathedral’s Chapel. However, it was replaced by the current statue that presides over the altarpiece of the High Altar in the 14th Century.

In 1300, it also arrived to the Cathedral’s Choir an alabaster statue of the Virgen Blanca donated by the archbishop Gonzalo Pétrez. However, the Toledan citizens had already chosen the statue of the Virgen del Sagrario which presided over the ancient sacrarium —of which it takes its name— as their patron saint. Later, it was enthroned in the current chapel after the restructuring of the space commissioned by cardinal Quiroga at the end of the 16th Century.  King Felipe III inaugurated it with great solemnity in 1616 days before the Virgin’s Assumption festivity, in a ceremony that included the premiere of the religious play St. Ildefonso and the Virgen del Sagrario, composed by the great dramatist and Cathedral’s chaplain, Calderón de la Barca.

The Solemnity of the Assumption of the Blessed Virgin is celebrated in Toledo as one of the most important festivities of the Christian calendar when referring to the dogma that affirms that Mary, after her earthly life, was taken to heaven in body and soul. The New Catechism of the Catholic Church (#966) explains it this way: “Finally, the Immaculate Virgin, preserved from all stain of original sin, once finished the course of her life on earth, was taken to the glory of Heaven and elevated to the Throne of the Lord as Queen of the Universe, to be more fully shaped to his Son, Lord of lords and winner of sin and death”. Pope John Paul II said in one of his Catechesis on the Assumption that “The dogma of the Assumption affirms that the body of Mary was glorified after her death. Indeed, while for other men the resurrection of their bodies will take place at the end of the world, the glorification of the body of Mary came earlier by a singular privilege “(St. John Paul II, July 2, 1997).

The celebrations begin in Toledo’s Cathedral eight days before the Day of the Virgin with the so-called Octavario in honor of its patron saint. For the organization of all acts, the Cathedral’s Chapter has since 1924 the support of an association of lay people (Esclavitud de la Virgen del Sagrario) who process a special devotion to the patron saint of Toledo. The festive calendar starts every 7th of August with a liturgical celebration in the chapel of El Sagrario in which the veil that protects the Virgin is discovered showing it dressed. Next, the statue is taken in procession to an altar placed inside the Door of the Lions, where it remains until the closing of the Cathedral on the 15th of August. That day, the worships that honor the mother of God end with the celebration of the solemn Eucharist presided over by the Archbishop and the procession of the Virgin through the Cathedral’s naves. The next day, the statue will occupy the throne of the chapel again—without its ceremonial dress— waiting for the next Octavario.

The wells of Toledo’s Cathedral

The first legend goes back to the 17th Century. In those days began the tradition of offering water from the Cathedral’s wells to quench the thirst of neighbors and visitors who came to Toledo during the eight days of festivities that accompanied the inauguration of the works of the Virgen del Sagrario Chapel in August 1616.

Legend says that among the chaos of people who came to the Primate Cathedral a child died from a heat stroke but returned to life after drinking the water from one of the jars offered by the priests of the Cathedral’s Chapter.

The miraculous power of that water is attributed —by mistake— to the fact that the Virgen del Sagrario could be hidden in the cloister’s wells to protect it from the Arab invasion (However, the date of the Virgin’s statue is later). The miraculous properties are also attributed —without scientific basis— to the effect of the algae and hallucinogenic mushrooms that can be found in the ancient walls of the Cathedral’s wells (Something that has not yet been studied).

In the first volume of his ‘Obras Completas’ and with the title ‘Leyenda 4. La Aljorca de Oro’, the Spanish poet Gustavo Adolfo Bécquer narrates the second legend about the Virgen del Sagrario: The story of a young man (Pedro) who, following the indications of his beloved (Maria), came into Toledo’s Cathedral at night in order to steal the jewel that adorned the Virgin’s statue. We believe that there is no better formula to explain that legend than to reproduce the final fragments of the work:

“(…) On the same day that the scene that we have just mentioned took place, Toledo’s Cathedral celebrated the last of the magnificent octave of the Virgin. The religious festivity had brought an immense crowd of faithful to the temple. Once the crowd had already dispersed in all directions, the lights of the chapels and the main altar had gone out and the colossal doors of the temple had ground on their hinges to close behind the last Toledan citizen, a man as pallid as the statue of the tomb on which he leaned for a moment while controlling his emotion came forward from the shadows. He stealthy slipped until the railings of the transept. There, the brightness of a lamp allowed to distinguish his features. It was Pedro.

Pedro made an effort to continue on his way; He reached the railings and followed the first tier of the main chapel. Around this chapel are the tombs of the kings, whose stone statues with the hand on the hilt of the sword seem to watch night and day for the sanctuary, in whose shade they rest for an eternity. Go on! murmured Pedro in a low voice. He wanted to walk but he could not. It seemed that his feet had been stuck in the pavement. He lowered his eyes while his hair bristled with horror. The floor of the chapel was made by wide and dark sepulchral slabs.

Go on! exclaimed Pedro out of his wits again approaching the altar and climbing up it to the footstool of the statue. All around him was covered with chimerical and horrible forms; everything was darkness or dubious light, more imposing even than darkness. Only the Queen of the heavens, softly illuminated by a golden lamp, seemed to smile calmly, kindly and serene in the midst of so much horror. However, that silent and motionless smile that reassured him for an instant ended up instilling him fear, a stranger fear, deeper than the one he had until now felt.

He tried to calm himself, closed his eyes in order to not see her and extending his hand with a convulsive movement tore off the bracelet, the golden bracelet, the pious offering of a holy archbishop, the golden bracelet whose value was equivalent to a fortune. Already with the prize in his hands; crushing it with his tense fingers with a supernatural force; it only remained to flee, to flee with it away. However, it was necessary to open the eyes for the escape. Pedro was afraid to see, to see the statue, to see the kings of the graves, the demons of the cornices, the fabulous monsters of the capitals, the shadows and the rays of light that, like white and gigantic ghosts, moved slowly in the depths of the naves, full of fearful and strange murmurs.

Finally, he opened his eyes and gave a glance, escaping a shrill cry from his lips. Toledo’s Cathedral was full of statues which, dressed in long and unseen garments, had descended from their places occupying the whole area of the church. They looked at him with their eyes without pupils. Saints, monks, angels, demons, warriors, ladies, pages, cenobites and villains were surrounded and mixed up in the naves and the altar. At his feet, the marble archbishops that he had seen at other times immobile on their mortuary beds officiating on the King’s tombs on their knees. In addition, a whole world of reptiles and vermin of stone, chimeric, deformed and horrific appear before him crawling on the slabs, climbing the pillars, cuddled in the canopies and hanged in the vaults like the worms around an immense corpse.

He could not resist anymore. His temples beat with frightful violence; a swarm of blood darkened his pupils; He threw a second scream, a heartbreaking and superhuman shout, felling fainting on the altar.

When the next day the clerks of the church found him at the foot of the altar, he still had the golden ring in his hands. But when he saw them approaching, he exclaimed with a shrill laugh:

The unhappy was crazy.