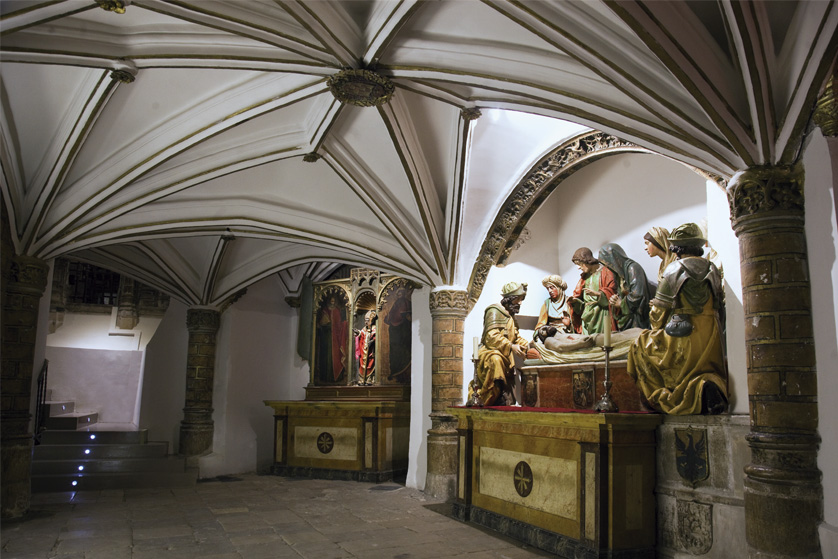 18 Nov THE SECRET OF THE CRYPT OF THE PRIMATE CATHEDRAL

Almost all of us have heard about her martyrdom, together with the 11,000 virgins, in an historical-legendary story that inspired the painting of Caravaggio or Rubens and gave rise to innumerable poems, novels, sculptures and reliquaries. But few, very few, knew that Toledo’s Cathedral has kept for more than four centuries the skeleton of St. Úrsula in the old Sepulcher chapel, in a crypt usually closed to the public. Finally, the Cathedral’s Chapter has taken this year the decision to restore the space and to publicize the saint’s urn due to her undeniable historical interest and with the aim to honor, as she deserves, the patron saint of the young girls.

The Second Vatican Council, in point 111 of the Sacrosanctum Concilium, says that “(…) According to tradition, the Church worships the saints and venerates their statues and their relics (…)”. Toledo’s Cathedral is a clear example of that worship because, throughout its millenary existence, it has venerated more than a hundred reliquaries that, since 1591, are guarded in the cathedral’s “Sacrarium” (El Ochavo room). Cardinal Quiroga ordered to build this area to house all the relics that were scattered throughout the temple.

But there is a relic outside El Ochavo room and of which there is hardly any documentation. It is about the remains of St. Úrsula. They remain guarded behind the bars of the central crypt, turned into a chapel in the time of king Sancho IV of Castile (1284-1295) to be buried in it. The singularity of the container (under the main altar) and, especially, of the content (a skeleton of a woman inside a sarcophagus) confers both the Cathedral’s crypt and the relic itself an importance that to date has not been recognized neither exposed to the public nor investigated.

A royal crypt for a holy martyr

This space can be considered the epicenter of the Primate Cathedral; it is the original crypt of Toledo’s Cathedral, located on the old Chapel of the Holy Cross and the High Altar, which Sancho IV the Brave reserved for his own sepulcher after moving the remains of Alfonso VII the Emperor, Sancho III the Desired and Sancho II King of Portugal to the Holy Cross Chapel.

But at the end of the 15th Century, cardinal Cisneros (1495-1517) decided to transfer the funerary worship of the Kings to the Holy Spirit Chapel, which from that moment was renamed as the Old Kings Chapel to differentiate it from the New Kings Chapel (built for the Trastámara dynasty). However, the remains of Alfonso VII, his son Sancho the Desired and Sancho the Brave remain on the sides of the main chapel.

The crypt guarded for years —like other Cathedral’s spaces— different relics until the end of the century when they were collected in El Ochavo room. Cardinal Pascual de Aragón (1666-1677) needed a singular space in Toledo’s Cathedral to keep the remains of St. Úrsula given to him by the Duchess of Feria —wife of his brother, Pedro Antonio de Aragón— and that belonged to Pope Clement X (according to the researcher and member of the Royal Academy of Arts and Historical Sciences of Toledo, Mario Arellano García). For this purpose, he decided to build a wooden and glass urn with the Cardinal’s shield on its front leaving it on the central altar of the crypt, in front of the spectacular carving of the burial of Christ made by master Diego Copín of Holland.

With the current restoration’s project of the crypt, Toledo joins that group of cities where other relics of St. Úrsula are exhibited, such as those of Cologne Basilica, the chest of the Hans Memlingmuseum of Bruges, that of St. Cecilia Cathedral, the busts of Castiglion Fiorentino or of Pamplona Cathedral, and the reliquaries of St. Joan de Valls, the Museum of Art and History of Durango or the Diocesan-Museum of Álava.

Details of the crypt

The first vision is overwhelming. It can be accessed by one of the two lateral passages of the main altar that now serve as entrance and exit of this area open to the public. The height of the stone staircase that leads to the underground crypt, of barely a dozen steps, forces us to walk hunched for a few seconds until we discover the three lateral altars of the semicircular wall; the central one dedicated to the holy burial —with a spectacular carving of Diego Copín—, another one dedicated to St. Sebastián —with paintings of Francisco Ricci-—, and a third one dedicated to St. Julián.

Once inside, we will be struck by the vaulted ceilings and the huge iron bars that prevent access to the main altar presiding over the whole and on which we can already see the urn of St. Úrsula.

As we approach, we will see how two large crystals framed in the front of a wooden structure reveal the entire skeleton; the skull (on a pillow and crowned with a diadem), the body and limbs (protected on the top by a kind of metallic mesh and by a rigid cloth that holds each of the parts together), in a delicate embalmed work.

The catholic church celebrates its festivity every October 21 considering St. Úrsula as the patron saint of the textile workers, the orphans, the women teachers and the young girls. It was created around her life and her legendary martyrdom an enormous devotion in the Middle Ages that has remained until our days thanks to the promotion of her figure made in Spain by Beatrix of Swabia (wife of Fernando III of Castile) and by the religious order created in the 16th Century (Las Ursulinas) by the Italian nun Angela de Mérici.

Legends aside, the story speaks about the existence in the 4th Century of a Breton princess named Ursula, daughter of the then King of Brittany (Donatu). She was wooed by a pagan prince to whom she refused to maintain her Christian beliefs and virginity. In order to achieve the consecration of her vows, the princess embarked with eleven maidens of her entourage on a pilgrimage to Rome, where she was received by Pope Ciriaco. But on the way back to Brittany she was captured in Cologne by the barbarians captained by Attila, who fell in love with the princess asking her to renounce her faith and to marry him. Úrsula rejected the proposal again causing that herself and her entourage were executed by archers (for that reason, St. Úrsula is usually represented with an arrow and a wide cape under which she protects her entourage).

The devotion to the young Saint gained strength in the 9th Century when they appeared in Cologne the remains of a 6th Century church with an epigraph that some understood as: “Martyrdom of Úrsula and 11,000 virgins”. This interpretation gave rise to the historical error about the number of the princess’ entourage since, centuries later, it was discovered that the correct translation of the number of martyrs who accompanied the Saint in her last years of life was 11 and not 11,000. The present Basilica of St. Úrsula was built on that church, inside which there is a disturbing room called the “Gold Chamber” that houses the remains of thousands of skeletons of an ancient local Roman cemetery that some still attribute to the 11,000 Ursuline virgins.

After World War II, the legend of the martyrdom of St. Úrsula and her virgins became once more relevant when it was found in the basilica of Cologne the original cemetery of the primitive church with a stone ashlar —now exhibited in the choir— in which it can be read that the building was built “in the place where some virgins met death for their faith (“..sanctae Virgines pro nomine Christi sanguinem suum fuderunt …”).

The holy burial of Christ, by Diego Copín

This sculptural group of polychromatic wood carved by Diego Copín in 1514 was an express order of a religious community, according to the historian Margarita Estella in her work “Apuntes para el estudio de los Entierros del siglo XVI”.

The original polychromy was made by Juan de Borgoña, although the carving was repainted in the 17th Century.

Diego Copín is also the author of some carvings of the main altar of the Primate Cathedral, as well as of the sepulcher of the Reyes Viejos, of the entrance portico to the Chapter House and, along with other sculptors, of the Leones façade.

All these works, together with El Entierro or Santo Entierro de Cristo represent, according to experts, the hispanisation of the French and Central European sculptors and carvers who worked in Spain, enriching this way the artistic panorama in the first third of the 16th Century.

The scene describes how Mary, Saint John and the three Holy Women contemplate, standing, the dead body of Christ in the shroud held by Joseph of Arimathea and Nicodemus, on bended knee at the head and feet of the tomb.

This work is a clear exponent of the delicate realism of this school, of which Copín is its maximum exponent in Toledo’s Cathedral even though he also left some works in the cathedrals of Burgos and León.