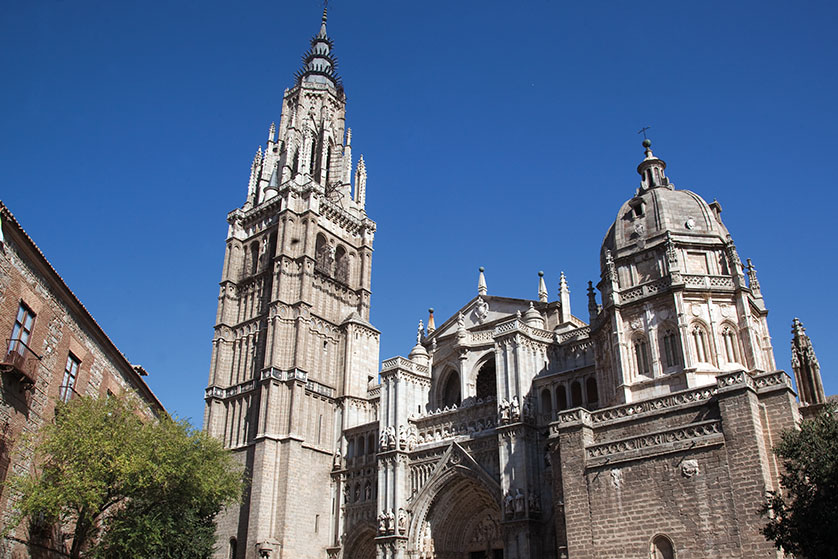 Toledo’s Cathedral was erected in the same place where it was the first religious temple of the city in Roman times and the later Visigothic basilica. The same place where for 300 years the Muslims built their great mosque (Ula Camii), which was adapted and consecrated again to the Christian cult in 1086. The same place that two years later received the title of Primate Cathedral, although the works of its current Gothic nave began in 1227 and extend until 1493. Since then, it is considered as one of the main patrimonial treasures of the world; the rich toledana (dives toledana).

It was built with white stone from Olihuelas (from the town of Olías del Rey), on the foundations of the Visigothic basilica of the 16th Century which later was covered and used as a mosque between 707 and 1807. The cloister houses an inscription with references to the Visigothic origin of the temple (In the name of the Lord the Church of St. Mary was consecrated in Catholic, the first day of the ides of April, in the happily first year of the reign of our most glorious king Flavius Recaredo, Era 625 [13 April] of 587]). And we also find some vestiges of the Muslim construction, such as the Islamic column embedded within the chapel of St. Lucía.

Toledo’s Cathedral restarts the original Christian cult in 1086 with just a change of the presbytery’s orientation since king Alfonso VI ordered to respect the structure, the traditions and the Mozarabic cult of the Cathedral. Pope Urban II grants two years later the title of “Primate Cathedral” for its belonging to the first diocese of the former Kingdom of Spain. And Pope Honorius III authorized the works of the current construction in 1222, which began in 1227 under the mandate of archbishop Mr. Rodrigo Jiménez de Rada.

Therefore, the current Cathedral which we can see and visit today is more than 700 years old and is Gothic style although with some later influences due to the added architectural elements. Its cross floor plan is composed of 5 naves and, at the head, the side aisles extended behind the Main Chapel surrounding the presbytery and creating a very rare ambulatory with a double semicircular aisle.

Its first architect was the master Martín, of French origin, who realized the traces of the floor plan and the beginnings of the work in the head of the temple. These first works were followed by others signed by the masters Petrus Petri, Rodrigo Alfonso, Alvar Martínez, Hanequin of Brussels, Egas Cueman, Enrique Egas, or Juan Guas.

But, undoubtedly, it was under the mandate of archbishop Cisneros (1495/1517) —appointed as Cardinal in 1507—, when the most important works were made. The Mozarabic chapel, (with the masters Juan Francés, Enrique Egas, Juan de Borgoña and his major master de Pedro de Gumiel; the main altarpiece (work of Diego Copín of  Holland); the upper cloister and the library. Some people describe that time as the Golden Age of the Primate.

4th C. Melancio, erects a first temple in Toledo in honor of The Saviour and St. Mary.

6th-7th C. The Visigoth king Recaredo built in 587 a Visigothic basilica in honor of St. Mary of which, according to tradition, it is preserved in the current chapel of The Descent the stone of the miracle of St. Ildefonso (*).

11th-13th C. Toledo’s Cathedral is consecrated to Christianity again in 1086 with the commitment of king Alfonso VI to respect the traditions and the Christian-Mozarabic cult. Two years later, it was appointed as Primate Cathedral of the Kingdom of Spain by Pope Urban II and, in 1227, the works of the current Gothic construction began under the archbishopric of Mr. Rodrigo Ximénez de Rada and the reign of Ferdinand III the Saint.

14th-15th C. The works of the main nave end with the closing of the sides, although the construction of the cloister begins under the archbishopric of Mr. Pedro Tenorio. A century later, the chapel of St. Pedro rises next to the entrance of the cloister and the chapel of Santiago erects in the head. In 1493, being archbishop Pedro González de Mendoza, the work was concluded with the closing of the last vault.

16th-18th C. The archbishop and later cardinal Cisneros closes all the stained glass windows and builds the Chapter Roome, the upper cloister, the Mozarabic chapel and the altarpiece of the Main Chapel. Archbishop Alfonso de Fonseca y Acevedo also built the chapel of the New Kings. A century later, the archbishop and cardinal Gaspar de Quiroga was responsible for the architectural whole of the chapel of The Holy Sacrament, the Ochavo (reliquary), the sacristy, and the treasure’s courtyard. And his successor, the archbishop and cardinal Moscoso y Sandoval, concludes the construction of the reliquary in the year 1653.

18th-19th C. The so-called transparent altar was built between 1729 and 1732, work of Narciso Tomé, and they were renovated under the archbishopric of Mr. Francisco Antonio de Lorenzana the facades and other exterior elements with the Neoclassical style that they present today. In 1800, the restoration of the old Carretones door is carried out (used for the entry of goods to the temple), and it is replaced by a new one named Puerta Llana (allows access to the temple from the same level of the street).

20th-21th C. Since the last century, Toledo’s Cathedral has not undergone significant changes, apart from the specific restoration of the broken stained glass windows in the years of the Spanish Civil War (1936-1939) and the permanent repair of the roofs in recent years.