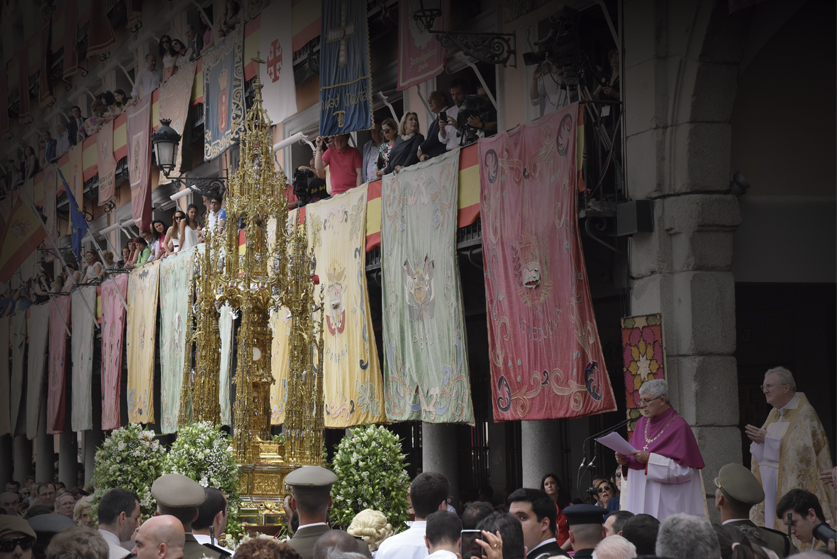 From more than 700 years, 60 days after Easter Sunday —every June’s Thursday after the solemnity of the Holy Trinity—, Toledo celebrates one of the most solemn Corpus Christi processions around the world. The streets of the historic center are covered with aromatic herbs, with artistic lanterns, floral ornaments, pastries, shawls and tapestries. During more than two kilometers, the Most Holy is protected under a continuous canopy of awnings attached to the façades. Toledo’s Cathedral, which gives origin and meaning to this great feast of International Tourist Interest since 1980, houses the initial and final section of the procession while guarding the main elements of the parade for the rest of the year.

Since its origins, Toledo’s Corpus Christi Feast has been connected with the Primate Cathedral, which already ordered the construction of the original silver Monstrance that disappeared in the War of the Communities (1521). However, the feast and procession of Toledo’s Corpus Christi reached its maximum splendor and worldwide fame thanks to queen Isabella I of Castile and the exhibition of curious pagan objects such as the giants and the monster, other liturgical ones of great value, such as the Cross and the processional sleeve that open the parade, the Cross of cardinal Mendoza that presides over the entourage of canons of the Cathedral’s Chapter and, above all, the great Monstrance that the goldsmith Enrique de Arfe made between 1515 and 1523 by order of cardinal Cisneros which houses inside the glass box where the Blessed Sacrament is shown, the nuclear element of the Corpus Christi.

Cross and processional sleeve. It is a monumental 170x80cm cross of golden silver that Alfonso V of Portugal gave to the Toledan archbishop Alfonso Carrillo de Acuña, prelate who managed and presided over the marriage of the Catholic Monarchs. Master Esteban Alonso embroidered in 1510 the scenes of the martyrdom of St. Eugenio and the apparition of St. Leocadia to St. Ildefonso in a sleeve that adorns the Cross at its base. Years later, Montemayor embroidered the scene of the Adoration of the Magi while Alonso Sánchez that of the Assumption of the Virgin. Both pieces are guarded and exhibited in the Museum of Tapestries and Textiles of Toledo’s Cathedral.

Cross of Mendoza. A 55x30cm cross on a 240cm silver rod. It was the cross that cardinal Mendoza carried in the occupation of Granada in 1492 and the one that the Catholic Monarchs placed in the Torre de la Vela tower of La Alhambra after the reconquest of the city. It is guarded in the Side Chapel of Toledo’s Cathedral by testamentary will of the Cardinal.

Monstrance of Enrique de Arfe. Considered as one of the greatest jewels of Christianity, it is formed by the monstrance of Isabella I of Castile that cardinal Cisneros bought in 1505 —made by the goldsmith Jaime Almerique with the first gold that Christopher Columbus brought from America— and by the great monstrance covering the first one which was carved by the German goldsmith Enrique Arfe also commissioned by Cisneros. It is kept and exhibited throughout the year in the Treasury chapel on a Baroque throne carved in 1740 by commission of the infant archbishop Luis Antonio de Borbón, brother of king Charles III. However, this Great Monstrance goes out in procession at the Corpus Christi Feast on a carriage built in 1784.