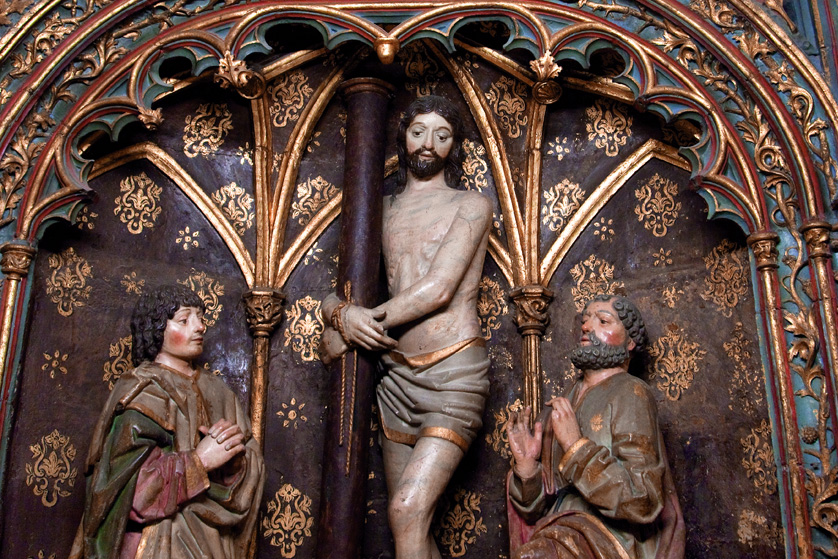 18 Nov THE MIRACLE OF SALVATION IN THE DIVES TOLEDANA

Toledo’s Cathedral celebrates every year the liturgical acts that recall the Passion, Death and Resurrection of Jesus Christ and gets actively involved in some of the processions organized by the 20 Toledo’s brotherhoods contributing —as you will see in this report— to maintain the splendor of the Toledan Holy Week.

Palm Sunday
The faithful gather with their palms or olive branches at eleven o’clock in the morning before the Cathedral’s Portal of the Fair or Portal of the Clock to receive the greeting of the Archbishop. The Bishop, accompanied by the Cathedral’s Chapter, addresses the people with the invitation to participate in the procession and blesses their branches. Then, a deacon proclaims the Gospel of the entrance of Jesus to Jerusalem and thus begins the procession which runs through the adjacent streets until returning to the temple through the Level Portal. After the procession, Toledo’s Cathedral hosts the Holy Mass, also presided by Toledo’s prelate.

Holy Monday
Toledo’s Cathedral welcomes on Holy Monday the statue of the Santísimo Cristo de la Vega, which goes that afternoon in procession from St. Leocadia Basilica to the Primate Cathedral. This brotherhood was refounded in 1929 after its disappearance at the end of the 19th Century. The first documentary references date from 1668. The icon represents dead Christ on the Cross with his right arm unnailed, so it is considered that it could belong to a sculptural group on the Descent. An unusual representation which has lead it as the focus of several Toledan legends, like that told by the poet and playwrighter José Zorrilla on the story of the gentleman and the maid: A buen juez, mejor testigo (1838) (A good judge, best witness). The current statue is a replica of the original one, which was destroyed during the War of Independence and whose head is preserved in St. Antonio convent.

Upon arrival at the Town Hall’s Square during its journey to Toledo’s Cathedral, there is a meeting between the Cristo de la Vega and the Cristo Nazareno Cautivo, who goes in procession every Holy Monday from the Cathedral.

Days before, the icon of this brotherhood —the youngest of Toledo’s Holy Week— is transferred from its headquarters in St. José Obrero’s church to the interior of Toledo’s Cathedral. The Cristo Nazareno Cautivo remains in one of the Cathedral’s naves, where the brothers prepare it for the procession on Holy Monday. At 9:00 pm the statue comes out from the Level Portal, goes through Toledo’s streets and comes back to the Cathedral, where the Cristo de la Vega already remains.

Holy Tuesday. Chrism Mass
At 12 o’clock on Holy Tuesday, Toledo’s Cathedral gather the priests of the entire diocese to concelebrate the Chrism Mass together with the Archbishop. A celebration in which the priests renew their promises and which is a symbol of the union of the priests with their bishop.

The celebration begins with the liturgy of the Word. After the homily, the priests renew their promises responding to the Bishop’s questions. The ceremony continues with the procession of the offerings, in which together with the bread, wine and water, the appointed deacons and ministers carry up to the altar the oils that will be consecrated and the perfumes for the chrism. The Mass continues until the end of the Eucharistic prayer. At the moment of the blessing, the oil of the sick which will be used in the sacrament of the Anointing of the Sick is the first one. The oil of the catechumens which will be used in the Baptism will also be blessed,. The Archbishop spills the perfumes on the oil to make the chrism, which will be consecrated for its use in the other sacraments.

In the afternoon, the people of Toledo meet at the Stations of the Cross which runs through the Cathedral’s naves. Every year, it is presided over by the statue of one of the Toledan brotherhoods or fraternities with the meditations preached by a Cathedral Chapter’s canon.

Holy Thursday. Lord’s Supper
The Easter Triduum begins with the celebration of the evening Mass of the Lord’s Supper. Toledo’s Cathedral hosts in the afternoon of Holy Thursday the celebration that remembers the supper of Jesus with his Apostles before his arrest and the beginning of his Passion. A dinner in which Christ instituted the sacrament of the Eucharist and of the Priestly Order, granting his disciples the power to celebrate it.

After the preachment pronounced by the Archbishop, it begins the rite of the washing of the feet in memory of Jesus’ gesture with his Apostles. Thus, twelve men chosen for this act occupy the seats prepared at the altar. The prelate washes the feet of each of them, with the help of the ministers and accompanied by the Gregorian chants of the choir.

The celebration continues with the Eucharistic liturgy which —being the day of Fraternal Love— could start with a procession of faithful bearing gifts for the poor. After the prayer of communion, the Archbishop incenses the Blessed Sacrament three times, tooks the pyx in his hands and covers it with the humeral veil. Thus begins the procession of the transfer of the Most Holy, headed by the cross, followed by the seminarians, the concelebrating priests and the Archbishop up to the tabernacle where it will be preserved. The priests and faithful share a time of prayer before the sanctuary. At night, starting at 11.00 pm, the Primate Cathedral hosts the prayer of the Holy Hour.

At the end of the afternoon, the acts of popular piety focus on the procession of Nuestra Señora del Amparo, whose statue comes out from the Level Portal going through the streets of the center until returning again to the Primate Cathedral. The Virgen del Amparo Brotherhood was founded in 1952 with the protection of the now disappeared Toledo Weapons Factory. Until then and since Medieval times, the Brotherhood of Santa Vera Cruz with the icon of Cristo de las Aguas had been the one which went in procession on the night of Holy Thursday. Unfortunately, the brotherhood disappeared in 1935.

Nuestra Señora del Amparo is accompanied by four professional floats representing the Passion of the Lord: “The prayer in the garden,” “Christ tied to the column,” “Our Father Jesus Nazarene” and “Christ of the Agony.” This brotherhood has more than 500 members.

Holy Friday. Decease of Christ
The Church celebrates the Death of Christ on Good Friday. Toledo’s Cathedral welcomes the Lauds choral song in the morning and the liturgical celebration in the afternoon. This one consists of three parts: the liturgy of the Word, in which the Passion and Death of Jesus is remembered by reading the passages of the Gospel and concluding with a time of silence and a universal prayer addressed by the Archbishop. The second part consists in the adoration of the Cross, transferred in procession to the presbytery. The faithful and celebrants also approach in procession to venerate it. Finally, the liturgy concludes with the Communion. The Most Holy is transferred from the place where it is kept since Holy Thursday while the communion is given to the faithful.

On Good Friday, the popular piety is manifested in the Toledan mother church with the Cristo de la Vega procession. It goes through Toledo’s Cathedral naves from midnight until leaving it through the Level Portal and returning to its Basilica in solemn procession. A procession followed with fervor by the Toledan faithful and full of emotional moments, such as the interpretation of the Stabat Mater by the musical chapel of the Major Seminary from the Cathedral’s area, at the time of the icon’s meeting.

Other manifestations of popular faith envelop the city in the mourning and silence typical of the date. The Holy Christ of Death crosses the narrow Toledo’s streets into the early morning. One of the most emotional moments is the prayer recited in front of Santo Domingo El Real convent, when several representatives of the Caballeros del Cristo Redentor’s Chapter goes out to the porch to intone the Miserere.

Meanwhile, Nazarene Jesus and his Most Holy Mother of Solitude depart from Santiago el Mayor church around half past six in the morning until their meeting in Puerta Nueva street.

In the afternoon, the Holy Burial procession brings together many brotherhoods which make different itineraries through Toledo’s neighborhoods. They depart either-or from St. Leocadia church, El Salvador church or the Mozarabic parish of St. Justa y Rufina.

Saturday of Glory. Easter Vigil
At around eleven o’clock at night, the Primate Cathedral celebrates the Easter Vigil. This way begins the Christian year which starts after the Resurrection of the Lord.

The ceremony begins with the lucernario —a candle-lighting liturgy—, when the people meet together with the Archbishop and the Chapter’s members in the Cathedral’s Portal of the Palms, in front of which the “new fire” has been lit. After a first admonition, the prelate blesses the fire and receives the Paschal candle. He engraves a cross in the candle on which he traces the Greek letters Alpha and Omega and the figures of the current year. Then, the Archbishop embeds five beads of incense in the shape of a cross in the candle and lights it with fire.

All the participants come into the Cathedral preceded by the Paschal candle, from whose fire they light their candles. Once in the presbytery, the candle is incensed and the Easter announcement proclaimed, while the faithful listen standing with their candles lit. The Paschal candle will remain lit on the altar until the day of Pentecost.

The celebration continues with the liturgy of the Word and the homily of the Archbishop. Next, the prelate blesses the water of the baptismal font and gives the sacrament of Baptism to the catechumens. The rest of the assembly renews their baptismal promises. From that moment, the eucharistic liturgy continues normally.

During the Easter Vigil, the blessing of the paschal lambs takes place in the Cathedral. According to tradition, the prelate adorns the lambs with bows and rattles which are given by the Cathedral’s Chapter to the Seises, a group of children who interpret the songs, students of Nuestra Señora de los Infantes school. Outside the Primate Cathedral, in the streets of the city, the members of the Santísimo Cristo de la Buena Muerte brotherhood leave early in the morning from Friday to Saturday.

Easter Sunday. Resurrection of the Lord
The pontifical Mass on Easter Sunday is presided over by the Archbishop of Toledo at 12 noon in the Cathedral. The people of Toledo meet together in the mother church to celebrate with their pastor the triumph of the Risen Jesus and the salvation of men. At the end of the Eucharist the prelate gives the papal blessing with plenary indulgence.

Finally, we propose you to look at a selection of works of art from Toledo’s Cathedral. We offer them in this magazine so that they could be available to all those interested. Look for them. Discover them. Admire them. Remember them… and you will be able to celebrate the miracle of Salvation any day of the year and anywhere.