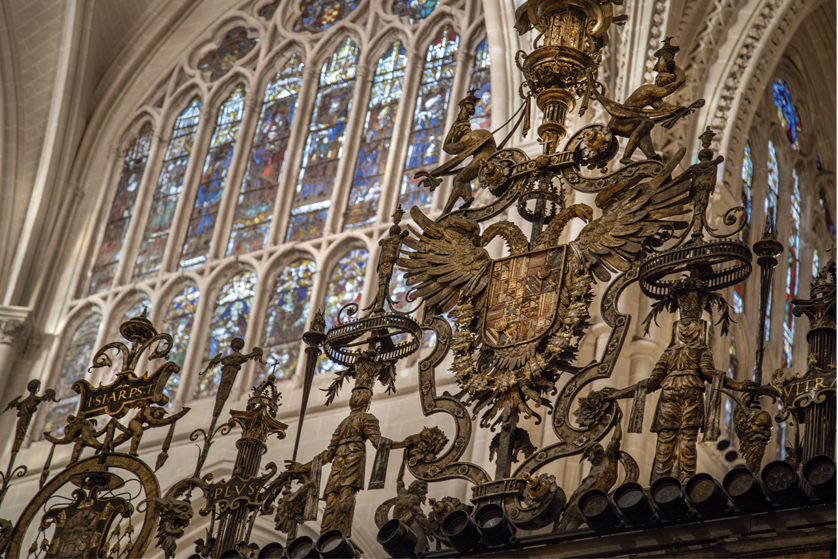 16 Dec The Archbishops of the “golden age”

Thanks to the ecclesiastical primacy of the diocese and to its relationship with the Spanish monarchy, Toledo and its Cathedral were for centuries the religious, political and cultural epicenter of the Iberian peninsula. Although the residence of the Medieval monarchs used to be itinerant, Toledo’s Cathedral and its Bishops began a “golden age” since the Catholic Monarchs choose it as the administrative and religious capital of the Spanish Crown. This thriving period lasted until the middle of the 18th Century, when the reciprocal interferences between Church, State and Crown were limited. Now, we invite you to discover some of the main protagonists of this era in Toledo who marked a fundamental chapter in the history of its Church and its Cathedral.

The first Visigothic monarch of the peninsula (Atanagildo 555/567), already placed the capital of his kingdom in Toledo. King Recaredo (586/601) ordered the construction of a basilica in honor of St. Mary in the city turning the diocese of Toledo into the first Visigothic-Catholic kingdom of the Iberian Peninsula. That episcopal primacy was maintained despite the almost 300 years of Arab occupation of the city being confirmed by Pope Urban II in 1227.

The unification of the Spanish kingdoms under the Crown of the Catholic Monarchs, allowed the royal city of Toledo to begin the so-called “golden age” of the church, which began with the bishopric of the powerful Alfonso Carrillo de Acuña (who ended his life retired and dismissed in Alcalá de Henares for supporting the claims against the Crown of Castile of Juana La Beltraneja, niece of Isabella I of Castile), continued with the Great Cardinal and advisor of queen Isabella I, Pedro González de Mendoza (counselor of the Catholic Monarchs and known as “the third King”) and with his successor, cardinal Cisneros.

The arrival of Charles V to Toledo in 1527, where he installed his court for 34 years, was the culmination of that golden age in which the Toledan Bishops were also the religious representative of other dioceses, accumulating several ecclesiastical and governmental positions such as general inquisitors, counselors or chancellors of the Spanish Crown, or, directly, as viceroys and regents.

Mendoza and Cisneros were followed by other powerful Bishops such as Fonseca (who also was Archbishop of Santiago de Compostela), Juan Pardo Tavera (founder of St. Juan Bautista Hospital) Juan Martínez Silíceo (promoter of the Noble Maidens College and the Infants College), Carranza (Archbishop of Toledo and royal advisor who was  falsely accused by the Inquisition of being in contact with the Castilian Lutheranism), Gaspar de Quiroga (architect of the first Cathedral’s sacrarium that gave name to the patron saint of the city, the Virgen del Sagrario), or Bernardo de Sandoval (who built the chapel of El Sagrario and the Cathedral’s reliquary, El Ochavo).

The emergence of the Renaissance, the Rationalism and the Enlightened trends of the Modern Age led the powerful Medieval Church-Crown leadership to conflict due to the interference between the two institutions in the distribution of their privileges. We find a clear example of the so-called regalist policy of the Spanish House of Habsburg in Toledo in the 17th Century. They forced to name the teenage nephew of Philip II, Albert VII, Archduke of Austria, as coadjutor Cardinal and Archbishop of Toledo between 1620-1641. A century later, the absolutism of the first Bourbons did the same with the son of Philip V, Louis I, who was appointed as Archbishop of Toledo in 1735 with only 8 years, as well as Archbishop of Seville in 1741. He ended up abandoning his positions in 1754 to marry, but he ordered before the construction of the base of the Great Monstrance of Arfe which is exhibited in the Treasury Room of Toledo’s Cathedral.

The balance between the Crown and the Church (in general) and between the Spanish monarchy and Toledo’s diocese (in particular) was reestablished in 1753 with the first Concordat(*) of the modern age and the later of 1851, giving rise to new chapters of the Toledan episcopology that will be analyzed in future installments.