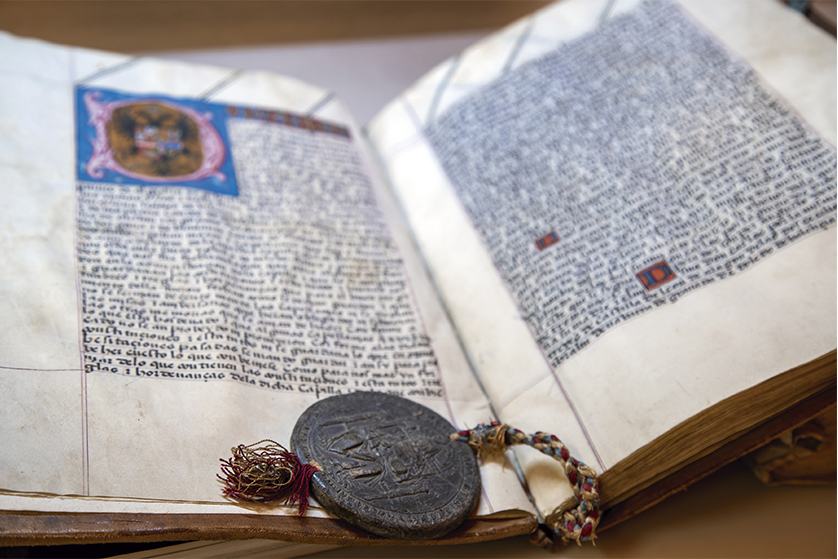 The connection between the old Spanish Kings and Toledo’s Cathedral reached its peak with Isabella I of Castile, who ordered to build inside the Cathedral a private space with a balcony over the crossing in order to attend the great celebrations at the High Altar. Years later, the Catholic Monarchs decided to be buried in Granada to perpetuate the heroic deed of the Reconquest of Spain while king Philip II ordered to raise a royal pantheon in El Escorial monastery in Madrid. But the monarchy had already joined its destiny with the Dives toledana, as demonstrated by the numerous contributions and visits that Toledo’s Cathedral has received from the Spanish royal house.

As we analyzed in the previous issue of this magazine, Toledo was already known as the royal city of Spain —urbs regia—, even before the construction of its current Cathedral. The urbs regia term was coined by the archbishop Rodrigo Jiménez de Rada (1209/1247), who got the support of king Ferdinand III to raise the Primate Cathedral in 1227. From that moment, the Cathedral was used as a royal pantheon of numerous monarchs until the 15th Century housing innumerable graves, relics and elements related to those Kings.

However, the Catholic Monarchs ordered to build their tomb in the Royal Chapel of Granada’s Cathedral after the reconquest of the Muslim emirate. Years later, between 1563 and 1584, king Philip II decided to build the royal monastery of St. Lorenzo de El Escorial where the representatives of the Spanish monarchy have been since then buried.

But far from losing its primitive connection, the Kings and Queens of Spain continued a close relationship with the Primate Cathdral  that has lasted to this day. There are also numerous royal examples after the Catholic Monarchs.

The sacristy of the Kings Chapel at Toledo’s Cathedral —a closed space for public visits— concentrates several royal portraits made by painters of the 19th Century, such as those of Ferdinand VII (by Vicente López Portaña), Isabella II (anonymous author), Alfonso XII (by Eduardo Rosales), and Charles IV and María Luisa of Parma (anonymous author).

The Cathedral’s Archive keeps documentary jewels such as the Constitution Book of the New Kings Chapel —with an imposing royal stamp of Charles V attached to a ribbon— or the documents of the visits of king Philip II to the Cathedral on May 20, 1596, and of Philip III because of the inauguration of the Virgen del Sagrario Chapel in August 1616. (Original chapter’s acts and transcripts of the texts in “Anales del racionero Arcayos. Notas históricas sobre la Catedral de Toledo (1593/1623)”.

You will find all elements which demonstrate the close relationship between the Primate Cathedral of Toledo and the Spanish monarchy in the magazine’s full report that is delivered together with the temple’s entrance.