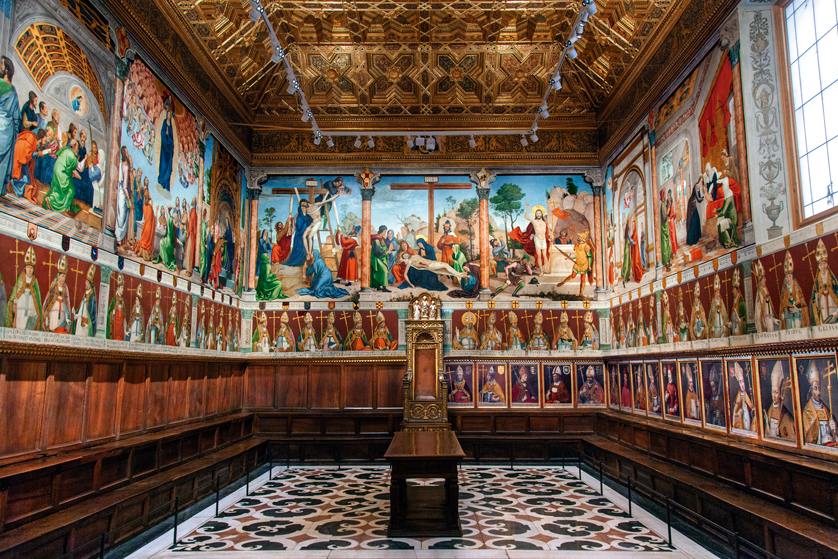 18 Nov FOREFATHERS OF THE MULTICULTURAL TOLEDO

We tried to summarize in the previous installment of this report the first steps of the Toledan Church and of its primitive bishops. Now, we continue with the list of Toledan Archbishops in the period between the reconquest of the city and the unification of the ancient kingdoms of Spain. We discovered, despite the complex historical context, the legacy of a group of prelates who contributed to the harmony between Arabs, Christians and Jews generating the cultural richness that characterizes since then the city of Toledo and its Primate Cathedral.

The 12th Council of Toledo in 681 presided over by the bishop San Julián (680-690) is considered as the germ of the ecclesiastical primacy of Toledo’s diocese since it gave the metropolitan Archbishop of Toledo the power to choose, examine and consecrate all the bishops of each of the Hispanic cities, in addition to own of Toledo. However, as we pointed out in the first installment, the work of the predecessor bishops was also decisive.

The emeritus canon of Toledo, Mr. Ramón Gonzálvez Ruiz, summarizes this in his work San Ildefonso y otros Obispos de la Iglesia Visigótica y Mozárabe (2018) saying that “the centrality of Toledo’s Church —consolidated in the Visigothic world and extended in Mozarabic times— was based on the following axes: A) The jurisdictional primacy of the city of Toledo arising from the 12th Council of Toledo; B) The centrality of the Toledan Church as a model in the canonical and liturgical issues; C) The prestige derived from the group of its great fathers and writers of the 7th Century; St. Eugenio II the poet and musician, St. Ildefonso the catechist and mariologist, and St. Julian, the theologian, liturgist and war chronicler, among others”.

The Arab invasion of the city (711/1085) was a serious setback for Christianity. The Muslims forbade the Christian worship in Toledo and in the rest of Spain turning the primitive Toledo’s Cathedral into its great mosque “aljama” (Ula Camii). The last Toledan Visigothic bishop Sinderedo (710/713) had to flee to Rome. However, the caliphs were in contact with the invaded Christians who paid taxes and who began to be called as “Mozarabic”. That way, 60 years later, the Muslims allowed the Catholic Church to have a representative in Toledo with the first of the Mozarabic bishops —Cixila (774-783)— who recovered the Catholic worship in the church of St. Maria de Alfizén (as Episcopal basilica) and in those of St. Justa and St. Eulalia.

His successor —the also Mozarabic bishop Elipando (783-807)— reached an rapprochement between Christianity and Islamism in Toledo that the Church of Rome described as heresy in the Council of Frankfurt in 794 promoted by Charlemagne (“Christological Adoptionism”). Paradoxically, the heretic prelate who held first the title of Archbishop of Toledo was assassinated years later by the Muslims in the so-called “day of the pit” in 807. He ended up being recognized as a saint by the Church, as well as his successor, St. Eulogio de Córdoba, who died as a martyr in Seville in 859 before he could take up his post in Toledo’s Cathedral.

Protagonists of the cultural concord

After the expulsion of the Arabs in 1085, Toledo’s Cathedral retakes the Christian worship with just a change of orientation of the presbytery since King Alfonso VI ordered to respect its structure as well as the Mozarabic traditions and worship. Although his wife Constanza promoted the Frenchman Bernard de Sedirac as the new Archbishop of Toledo (Bernardo de Cluny) urging him to eliminate any Islamic vestige in the city and in the mosque-cathedral, the intelligent will of the Spanish monarch was finally imposed beginning, since then, a time of cultural harmony in the city and in the diocese that ended up in the architectural and artistic wealth that today characterizes the city of Toledo, an example of coexistence and a melting pot of cultures.

King Alfonso VI showed once again his integrating character by offering the Muslims defeated in combat the possibility of leaving the city carrying their properties —if they rejected submission— or to stay in Toledo while maintaining their properties, under the stability of the fiscal regime, the freedom of religion and the use of their main worship buildings —if they accepted and recognized him as King—.

Years later, Alfonso VIII conferred for the first time the position of Major Chancellor of Castile to the archbishop Martin de Pisuerga (1206). This Palencian archdeacon showed the temperance of his predecessor and used his power to support the Mozarabs in the occupied territories by the Muslims launching the first evangelistic campaign with bilingual priests.

Pope Urban II gives the title of Primate Cathedral of the Kingdom of Spain (XXXX) to the temple again, even before Honorio III authorized the construction of a new Gothic temple which began under the term of Rodrigo Jiménez de Rada in 1227. The founding Archbishop of the current Toledo’s Cathedral ordered, in a new gesture of concord, to keep the few remaining elements of the Muslim mosque that can still be seen in the Primate Cathedral. These are the Islamic column of the Chapel of the Sacred Heart, the marble shafts that decorate the exterior of the choir, or the crisscrossed arches of Caliphal style in the triforium of the main chapel and of the ambulatory.