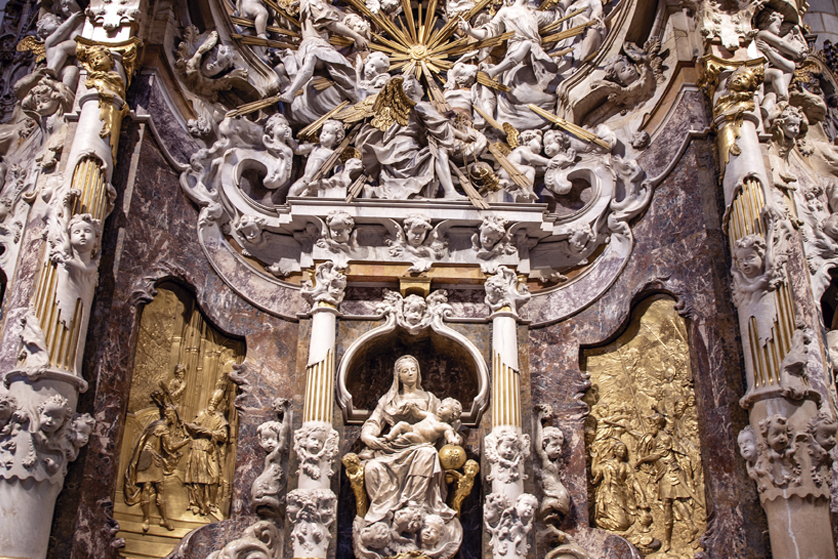 16 Dec El Transparente, The sacred light of the Dives Toledana

The full report that is delivered together with the temple’s entrance will offer you, dear visitor, a new vision of El Transparente (Baroque altarpiece) through several pictures showing all its grandeur and to the catechetical explanations of an expert like Pilar Gordillo —art historian, official guide and CEO of Evocarte company). We are going to discover the theological sense of this sublime and clashing waste of architecture, sculpture and painting; the worship to the Eucharist, the true Light of the Primate Cathedral of Toledo and of any religious temple.

This prodigious model of Baroque set in which architecture, sculpture and painting merges, was designed to illuminate with natural light the tabernacle of the main altar which is behind the altarpiece. The objective was achieved by breaking the Medieval vault in order to open a large window decorated with paintings, marbles and jasper. All together in a spectacular scenery symbolizing the Eucharistic exaltation, according to the place and purpose of the project.

Francisco Rizi already presented a first sketch to Toledo’s Cathedral in 1672, but it was the architect from Zamora, Narciso Tomé, the one who captivated the archbishop Diego de Astorga y Céspedes with a magnificent project that he personally drew and executed between 1720 and 1732.

The altar behind the main altarpiece is chaired by a statue of the Virgin Mary with the Child in her arms —like Salvator Mundi—, offering him for the first time to all men. In the middle, it appears a round window in the shape of an oculus adorned with solar rays through which the light enters to the tabernacle, leading to believe that the Blessed Sacrament is the Light that illuminates us in our lives.

The scene of the Last Supper with the figures of Christ and the Apostles on the oculus affects the Eucharist, which begins with the mystery of the Incarnation. The same occurs in the low-relief scenes of the life of David, with allusions to the offering of Bread and Wine in the Old Testament.

The whole of the altar is completed with a sublime mixture of marble figures, among which the archangels Michael, Raphael, Gabriel and Selaphiel stand out —the latter with a censer—. In the upper part, architect Tomé included the scene of the Imposition of the Chasuble to St. Ildefonso and the representation of the three Virtues —Faith, Hope and Charity— in intimate connection with the worship to the Blessed Sacrament.

The scenery moves to the top of the vault continuing with frescoed scenes and with infinite sculptures of angels and ornaments which seem to support the huge window and the walls located in front of the altar.

We are able to find among the pictorial scenes the Theft of the cup of which Benjamin —the youngest of Jacob’s sons— was accused; the Rain of baked bread over the camp of the armies of Gideon and Midian; the prophets Isaiah, Jeremiah, Ezekiel and Daniel holding several parchments with Eucharistic texts; and even the Twenty-Four Elders of the Apocalypse worshiping the lamb while God holds the Book of Seven Seals.

It is striking an angel that seems to hold the upper structure of this immense scenery with an iron lever and that, according to a free and widespread interpretation, Tomé sculpted to show that his work was well built and propped up.