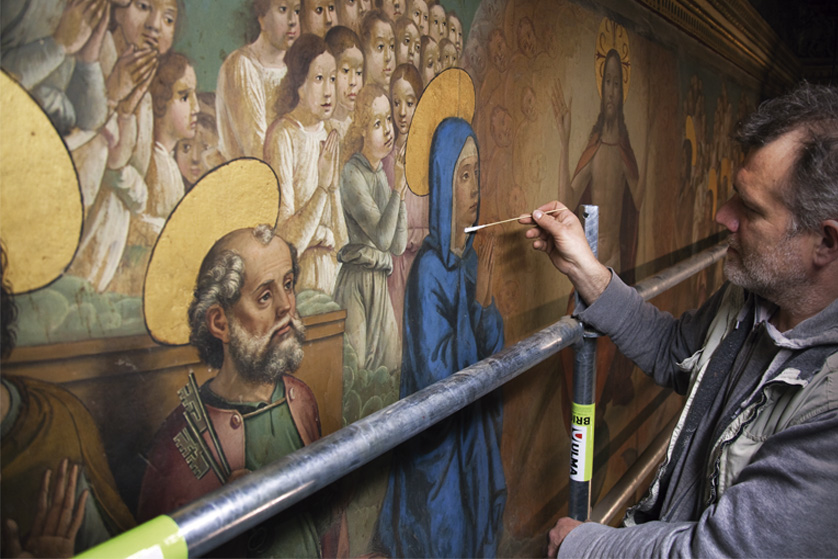 The Chapter’s House of any temple is used to celebrate the extraordinary meetings of its Chapter’s members. Moreover, in Toledo’s Cathedral it is part of the visitors tour because of the historical and artistic importance of the space. The portraits of its Archbishops summarize the history of the ancient episcopal church and the frescoes on its walls reflect the Marian advocation of the temple. It is, without a doubt, the soul of Toledo’s Cathedral. Thanks to the Cathedral’s Chapter and institutions such as ENDESA Foundation, the Chapter’s House recovers this year the splendor with which it was built in 1502 by initiative of cardinal Cisneros, of whom it was commemorated in 2017 the V Centennary of his death.

The “Chapter’s House” of a religious temple is the room where the chapters or extraordinary meetings of the Cathedral’s Chapter —its governing body— are celebrated. Hence the expression “call to chapter”, whose meaning derived over time “to draw attention”.

Until 1502, the ordinary Chapter’s House of Toledo’s Cathedral was in the current space of the Mozarabic Chapel (the original wooden ashlar is still preserved on one side). However, it was also used in summer the so-called “Summer Chapter’s House” in the current space that is between the lower cloister and de la Feria Street, with access to the street and to the cloister itself. It was cardinal Cisneros who decided to unite the old Chapter’s House and the Corpus Christi chapel with the aim to have a permanent chapel for the celebration of the Mozarabic worship. And he was the one who commissioned the construction of a new Chapter’s House in a space annexed to the temple’s apse, removing the chapel of St. Isabel and adding a space for the new entrance hall, the Chapter’s House and the offices of Work and Factory.

The rectangular structure of the Chapter’s House is perfectly visible outside the temple because it stands out from the rest of the semicircular apse. It also stands out from its granite stone façades —on the last brick floor—a kind of gallery of arches that keep the iron pegs for the drying of the candles that were made in the cathedral itself, since the space was used for years as a wax workshop. The lower part of the room, which is accessed by a small door in the atrium of the old St. Isabel Chapel, came to be used as the office of the labor canon, his treasurer, his accountant and his assistant, (since it connected the old Cathedral’s Workshop). Currently, it houses the Work and Factory office of Toledo’s Cathedral.

The interior space highlights due to its impeccable decoration, fusing elements of Gothic and Mudejar art and gaving rise to the so-called “Cisnerian style”. The first thing that stands out is the portico through which we access the Entrance hall, work of Diego Copín of Holland. Then, we go through the Entrance hall, a kind of rectangular corridor that served as a canons wardrobe (as attested by the magnificent wooden side cupboards), with a spectacular vegetal decoration painted on its frieze. In the background, it appears the main room for meetings with an impressive gold and polychromatic coffered ceiling designed by Diego López de Arenas and carried out by Francisco Lara (the sky of the Cathedral’s Chapter).

An archbishop’s chair presides over the room which is surrounded by the wooden bench where the canons sit for the extraordinary meetings. Also highlight the portraits of the archbishops of Toledo and the spectacular frescoes on its walls. Juan de Borgoña is the author of these oil paintings on plaster that represent 13 scenes of the Virgin’s Life and the Passion of Christ as well as of the first 32 portraits that, from cardinal Tavera on, belong to painters like Comontes, Carvajal, Tristán, Rizi, or Vicente López, and which summarize the history of Toledo’s episcopal church (its episcopology).

The narrative sequence of the Virgin’s scenes begins in the South wall with the scenes of “The Hug in the Golden Door”, “The Birth of the Virgin”, her “Presentation in the temple” and “the Annunciation”. The series is interrupted with “The Final Judgment” of the West wall, in which appear a group of condemned with the capital sins (“Arrogance, greed, lust, anger, gluttony, envy and laziness”) and a curious Roman inscription (“IVSTITIAE CVLTVS SILENTIVM”), which could be translated as “fairness is silence”, referring to the secret of deliberations in the Chapter’s meetings. The paintings restart in the North wall with the scenes of “The Visitation to S. Isabel”, “The Purification of the Virgin in the Temple”, “The Death”, “The Assumption” and, as a concrete tribute to Toledo’s Cathedral, “The Imposition of the chasuble to St. Ildefonso”. Finally, there are three scenes about the Passion of Christ on the East wall in which the Virgin appears collecting the body of Jesus in “The Descent”, praying before his lying body in “The Pieta”, but disappearing in “The Resurrection” ”

Restoration of the Chapter’s House

For months, the Cathedral’s Chapter prepared the project and got the necessary budget and support from Endesa Foundation to defray the cost of the new lighting. Specifically, 144.894 euros will be allocated for the material execution of new facilities and 220.320 euros for the restoration works of the room.

During the launch ceremony of the restoration project, the Cathedral’s architect, Mr. Jaime Castañón, and the restorer of the temple, Mr. Antonio Sánchez-Barriga, explained the periods and techniques of the works, whose objective is to recover the coffered ceiling and to return the color and the original perspective of the paintings on its walls. For his part, the general director of ENDESA Foundation, Carlos Gómez-Múgica, pointed out that the contribution of the company was intended to help in the preservation of the space (with a new LED lighting) allowing significant energy and maintenance savings. Finally, the Chapter’s dean, Mr. Juan Miguel Ferrer, emphasized the double importance of the Chapter’s House; “First, because the paintings of Juan Borgoña capture the Marian synthesis, from her conception until she arrives to Toledo in order to impose the chasuble to St. Ildefonso; And, secondly, because the Archbishops’ portraits represent the continuity of the Faith in the diocese of Toledo, in a historical journey or episcopology that allows us to know its protagonists and to remember that the Church must be committed; tied to its work on Earth. ”

Thanks to the agreement signed at the end of 2017 between the Chapter’s Dean and those responsible for the company, the works for the new lighting of the Chapter’s House will be carried out in parallel with the restoration works in a project that will consist of three phases: First, the criteria of air conditioning, electricity, plumbing, security and closed television circuits will be designed and specified. Second, they will be carried out the study of the restoration and the documentation by archives and physical-chemical studies prior to the restoration. Finally, the new lighting will be installed. Thanks to its high energy efficiency, it will not only improve the conservation of the paintings but reducing the current maintenance costs of the Chapter’s House.