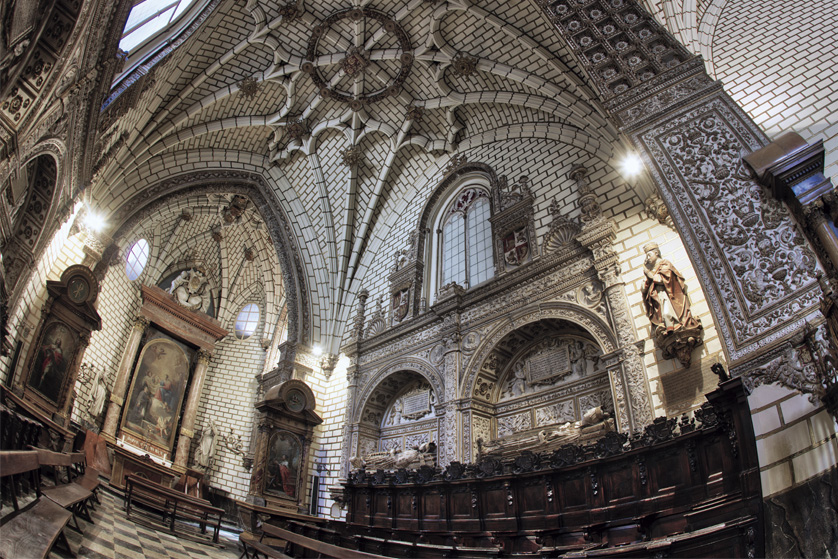 This year commemorates the V Centenary of the Collegiate Church of Torrijos designed by the architect and sculptor Alonso de Covarrubias (Torrijos, 1488-1570). To remember this anniversary —of the author and of the whole of his work—, Toledo’s Cathedral adds to the scheduled events the so-called ‘Covarrubias Route’ which, among other initiatives, will exhibit in the Chapel of the New Kings (also designed by this Castilian Renaissance genius) some archives and documents about the remnants of Covarrubias in the Primate Cathedral. A legacy that we have tried to summarize in this report with the help of the professor and curator of the V Centenary exhibition, Fernando Marías.

“He gave his whole life to architecture.” This is how professor Fernando Marías emphasizes the figure of Covarrubias. And, certainly, the reading of contemporary writings and specialized documents on this key figure in Spanish architecture makes us to understand his mastery, his example value as the introducer of the Renaissance in Castile, and his essential talent in the Plateresque style. The work of Covarrubias is extensive and his intervention in Toledo is great but his trail also threads unique works in Madrid, Granada, Seville or Valencia, among other places. Undoubtely, his artistic legacy is essential for architecture.

The origin of Alonso de Covarrubias is in Torrijos and his birth dates back to 1488. His father, Sebastián Martínez de Covarrubias, was a renowned embroiderer of Gerindote, also native town of his mother, María Gutiérrez de Leyva. Alonso had two brothers: Marcos, who had the same office as his father in Alcalá de Henares and Juan, clergyman and portion controller in Salamanca’s Cathedral. His training started in Toledo with Antón Egas continuing it with Enrique Egas. An extended bond to Torrijos and Salamanca. Juan Guas opened up doors of art to him. Being still very young, he reached between 1514 and 1515 the degree of master of stonemasonry and was appointed as major master of Toledo’s Cathedral.

His relationship with the Egas masters allowed him to meet his wife: María Gutiérrez de Egas, who is not sure if she was niece or granddaughter of the Egas. Of their marriage, in 1510, there were five children. Ana was the youngest and Diego de Covarrubias (his eldest son) reached the bishoprics of Ciudad Real and Segovia in addition to the presidency of the Council of Castile. In addition, his son Antonio was canon of Toledo, his daughter María was married with the sculptor Gregorio Pardo, and his daughter Catalina, Dominican nun in Toledo.

From the learning and experience of Covarrubias

Chronicles and specialized studies reveal that Alonso de Covarrubias was a magnificently complete artist, tireless in the beat of novelty and avant-garde. He projected a balanced study of space and volumes; but also was an essential citizen, who embraced his native Torrijos, but also was part of the endless excellence of Toledo.

We can differentiate three stages in the work of Covarrubias. The one of youth (of formation and training), between 1510 and 1526, meant the bond with the stonemasons Antón Egas, Juan Torrollo and Juan Guas. He began to absorb knowledge as a stonemason and carver. In Sigüenza, he learned with architects and sculptors such as Enrique Egas, Sebastián de Almonacid or Vergara El Viejo. And in 1526 he signed his first contractual commitment for the construction of a convent in Guadalajara.

During his second stage (1526-1541), Alonso de Covarrubias began to unleash his ingenuity and to widen his own initiative with his important Plateresque works. He was appointed in 1534 as master builder of Toledo’s Cathedral and of its Diocese.

That period is followed by the third stage that will last until his retirement and death in 1570. The definitive time of his career and his art with a vanguardist vision, more advanced, without losing the link with the previous Renaissance references but taking advantage of the decorative alternatives of the new models. Tavera de Toledo Hospital distinguishes him as a reference of the Serlian Spanish Mannerism.

The mark of Covarrubias in the Primate Cathedral

His work is very extensive in quality, quantity and presence in Spain. And clear is the mark of Alonso de Covarrubias in the Primate of Spain, the Cathedral of St. Mary in Toledo.

Carlos V received from Covarrubias the drawings for the construction of the Chapel of the New Kings, built between 1531 and 1534 on the place of the former Cathedral’s smithery. The original was placed at the foot of the north Cathedral’s nave and Covarrubias was responsible for its transfer to the head of the temple building the great funerary chapel of the Trastámara.

Considered as the first great work of Covarrubias in Toledo, the architect conceived —more than a chapel— a small interior church made up of a nave with two sections, with a Gothic ribbed vault and a polygonal apse, as well as a sacristy and an entrance hall. He put special care in the façade an in the ornamentation and carving of the tombs; With burial Gothic sculptures put in Renaissance arcosoliums. He also made in this chapel the arcosoliums of the sepulchres of Enrique II and Mrs. Juana Manuel, and the Renaissance niches of the sepulchres of Enrique III and Mrs. Catalina of Lancaster.

The gift of Covarrubias was also present in the interior Leones façade of (1540), in the Cathedral’s high choir (the arcade is supported by the porphyryc colonnade in front of the walnut seating) and in the interior Presentación façade (1563). This interior passage to the cloister from Toledo’s Cathedral has a semicircular arch and pilasters with plateresque decoration and human figures. The Cathedral’s coat of arms is fixed in the key of the arch. On the sides of the arch, the columns rest on a smooth base and on another less thicker with human figures.

The architect also put his signature in the Trinidad chapel (with paintings and sculptures of Juan de Borgoña) and in the Tesoro façade, at the foot of Toledo’s Cathedral (on the right side nave), with balustraded columns and a plateresque style cornice, in a work that began in 1537.

The number of works of Covarrubias is extended with funerary works like the sepulchers of Mr. Francisco Fernández de Cuenca, Mr. Tello Buendía, Mr. Fernando del Castillo (Renaissance arcosoliums); the chapel of the Trinity, specifically in the altarpiece, the sculpture (work shared with Juan de Borgoña), and in the design of the sepulcher of Mr. Gutierrez Díaz (of white stone and abalaster).

The legacy of Alonso de Covarrubias seems eternal. Today, it is reflected on the occasion of the V Centenary of the first Mass in the collegiate church of Torrijos (where he also gave his soul at the service of architecture), and with the launch of the so-called ‘Covarrubias Route’, with which it is intended to make known the bulk of the work of the Renaissance genius of the Primate Cathedral.